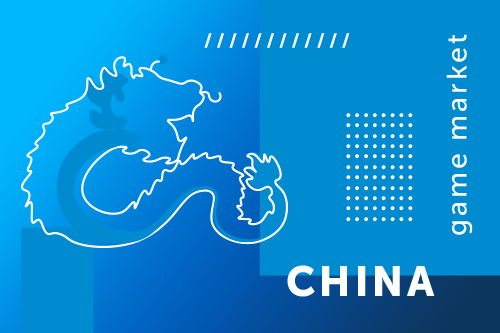 China (officially the People’s Republic of China, abbreviated as PRC), is a country in East Asia. It is the largest country in the world in terms of population, and the fourth largest in size. The majority of the population are ethnic Chinese.

According to its constitution, the People’s Republic of China is a socialist country. The economy of China is ranked second in the world in terms of nominal GDP and first in GDP adjusted for purchasing power parity. China is the world leader in manufacturing most kinds of industrial products, and the largest world exporter (which earned it the nickname “the world’s factory”). It is one of the foremost world powers in terms of astronautical and military might. China has the world’s largest reserves of foreign exchange and gold.

The Chinese video game industry is the largest in the world, both by revenue and number of players. The key feature of the Chinese gaming market is the domination of national projects and companies. Locally-made projects earn the most in China. Giants like Tencent and NetEase aside, foreign corporations also have a presence in the market, such as: Activision Blizzard, Gameloft, EA, and others. Besides the domination of local companies (over 75% of games are made in-country) and the huge competition (over 250 publishers), the Chinese market is characterized by a complex bureaucratic apparatus that regulates the release of all games.

Permission to publish a game is granted by several government agencies, which check the project for prohibited content. The most difficult step is getting a registration number for the game (ISBN). This can take more than eight months. Under these conditions, all controversial ideas are rooted out, which must be taken into consideration when publishing games.

There is one more important nuance: it is difficult for foreign companies to compete in the Chinese market on their own, which often forces them to turn to the services of local publishers. Only a Chinese company can get an ISBN for a game. Just having an office or a branch in China is not enough. Additionally, the game itself must contain a user verification system based on real names, and restrictions to prevent addiction to gaming.

Finally, you must receive a Security Assessment Form. To do so, you must explain to the Chinese government where you store data on users and prove that your game does not contain illegal content. Even internationally-recognized companies are forced to meet these conditions. So, for a long time Blizzard games have been published in China by NetEase.

The COVID-19 pandemic had an impact on the Chinese market, too, positively affecting industry revenue. In 2020, revenue increased by 20% compared to 2019. The growth for mobile games was even more significant: 30%. The Chinese Ministry of Industry and Information Technology also published data on mobile traffic: during Chinese New Year in 2020 (January 24–31), the country consumed 2.716 million TB, which is a 36.4% increase on the same period in the previous year. Naturally, online games contributed to this growth: the average time spent gaming increased (consequently, so did the number of in-game purchases). Even though the harsh quarantine measures in China are a thing of the past, player engagement and expenditures have not fallen to the previous level.

Among the factors positively affecting the development of the gaming market and cloud gaming in particular, the widespread availability of 5G networks should be noted. The number of users for such networks has already surpassed 160 million (90% of the total number of users in the world). In 2021, the number of potential users for cloud games in China will reach 60 million.

The status of eSports in China deserves separate mention: the government is actively contributing to the development of this industry, and considers it an element of national pride and a demonstration of the technological superiority of the country. Back in 2003, the Chinese General Administration of Sports added virtual reality competitions to its list of sport disciplines. In 2016, the Ministry of Education officially recognized eSports as a profession. Technological giants like Tencent and Alibaba are investing hundreds of millions of dollars into building eSports arenas and organizing tournaments and livestreams. Thanks to this policy and large-scale investments, eSports have become a part of the social life of Chinese young people (26% of internet users watch streams of eSports events at least once per month).

Despite comprehensive support for the industry from the government, there are also risks that come with its regulation. In order to get licensing from the regulator, a game must correspond to Chinese values. Developers sometimes have to create special versions of games for China. No concessions are made, even for local developers. So, in 2018, when the licensing power was transferred from one agency to another, the number of approved games shrank by five times. In 2019, even Tencent was excluded from the last round of approvals. Recently, information has come out about new regulatory restrictions. In general, this policy stems from the government’s efforts to protect the younger generation from the harmful effects of games. One government media source published a recent article calling video games “spiritual opium” and comparing them to electronic drugs. It is unclear whether this will lead to any changes, and if it does, how these changes will affect the state of affairs in the industry. The situation has created uncertainty for developers and publishers. 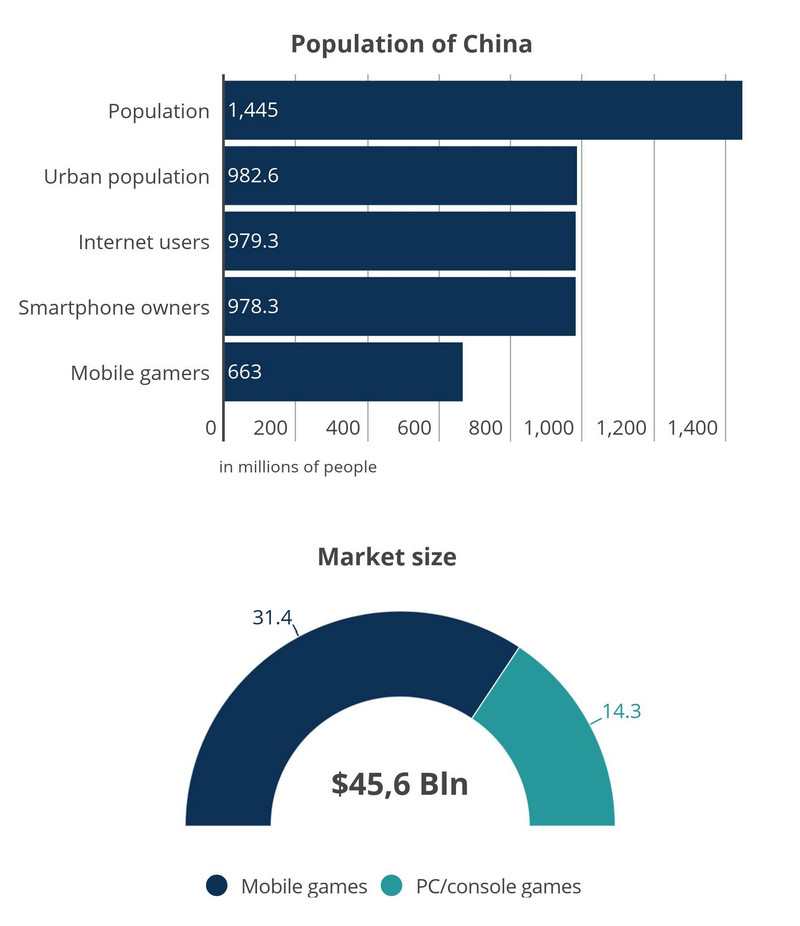 A distinctive feature of the Chinese market is the large engagement of women. This touches on more than just the traditionally “female” genres like puzzles and casual games, but also hard-core games: 54% of players for Honor of Kings in China are women. In many regards, the success of Honor of Kings stems from its good design and elements of social media. Additionally, there are successful products aimed exclusively at a female audience, like Love and Producer or Travel Frog. 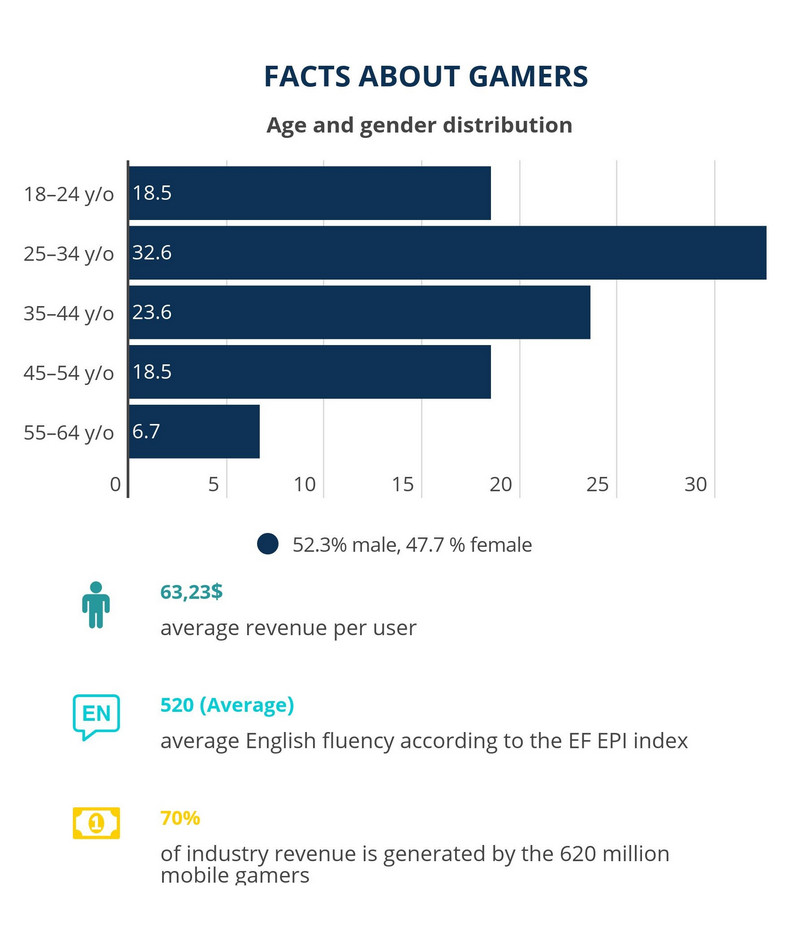 Fantasy is the most popular setting for Chinese gamers, with the historical Three Kingdoms period taking second place. Chinese gamers are passionate and like making in-game purchases if they can be used to show off status. However, it must be noted that casino-based elements are legally prohibited. 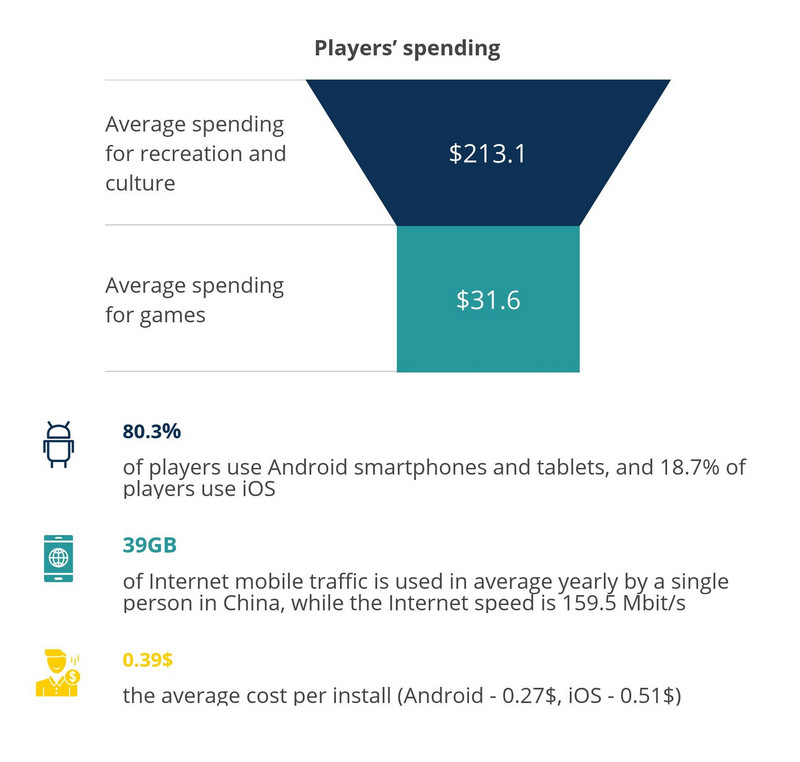 Chinese law prohibits foreign game companies and companies with foreign investors from directly publishing games in China. So, local developers have a dominant position, particularly Tencent and NetEase, which have released their own successful projects (Call of Duty Mobile, League of Legends, Onmyoji) as well as undertaking publishing and distribution of games by EA, Ubisoft, Activision, and other industry giants. Besides these two, there are around 250 other developers in China, including: 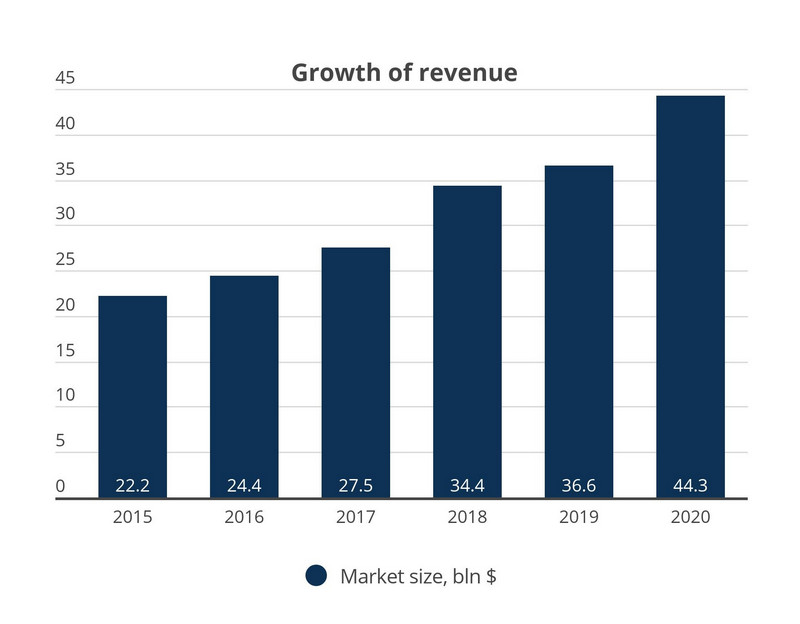 When localizing, the following factors should be taken into account: